Oktoberfest – Yeah it’s with a K

For a holiday that isn’t based in religion and in the United States Oktoberfest is still well known to most Americans. Most people may not appreciate it, or be able to tell exactly what it is, but most will say something about beer and Germans, and of course my favorite, lederhosen.

Oktoberfest, and I’m talking about the one in Germany, is guest to about 6 million people from around the world and been going on for 200 plus years. It may come as a surprise to most that it actually starts in September and usually goes for 16 to 18 days. In these 16 to 18 days millions and millions of liters of beer are consumed, with the record at 7.4 million in 2011, and last year we were looking at about 6.7 million liters of beer. To put that in perspective an Olympic sized swimming pool has 2.5 million liters of water in it. 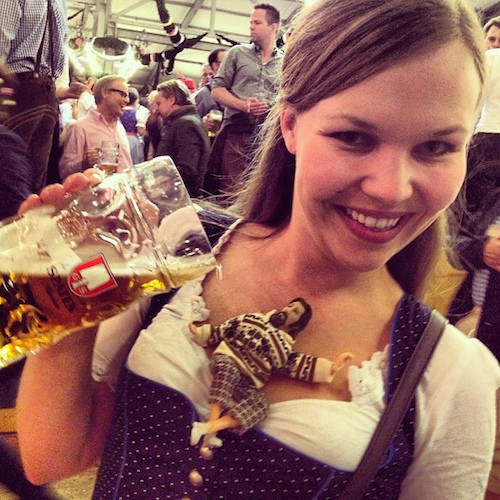 Luckily the number of attacks involving beer glasses is down as well, Oktoberfest does produce some very interesting statistics. For example last year only one set of dentures was lost, which is the lowest they’ve seen in decades. Way to go advances in dental adhesive.

Oktoberfest all started like you did, a man loved a woman. This man just happened to be a Prince and later a King. So Prince Ludwig marries Princess Therese in 1810, and they throw a hella big wedding. This celebration had everything, including horse racing. After the celebration was over folks had so much fun they decided to do it again next year and thus the Oktoberfest tradition was born. Oktoberfest has been cancelled numerous times due to war, and disease, but these were rare.

Modern Oktoberfest is open to everyone and has become quite the family affair. Germany is not as puritan as America when it comes to beer so it’s not an unfriendly environment for children. In Germany you can get beer just about anywhere, and that includes McDonalds of all places. Modern Oktoberfest is known as one of the largest fairs in the world. Oktoberfest is not limited to just drinking beer there are parades and carnival rides.

What about the BEER!

So there are ways to kick off any party, and you really can’t hate on one or another, but you sure as hell can love one. Oktoberfest commences with a twelve gun salute and the tapping…. The local Mayor of Munich is presented with a very distinct honor. Everyone waits in silence after the 12 gun salute as the Mayor approaches, it’s noon now. The Mayor approaches a keg and with a tap and proceeds to tap the first keg of Oktoberfest, and the party commences with the Mayor yelling “O’zapft is” also known in English as, “It’s tapped.”

The Party commences after the Mayor of Munich delivers the first beer to the Minister President of the State of Bavaria.

Oktoberfest has very strict rules regarding the beer served. These rules are steeped in tradition and brewed only by masters who adhere to these traditions. The beers must be brewed in Munich as well. The’ Reinheitsgebot’ lays the rules down for these beers, in English that is the Bavarian Purity Requirements. Only six breweries operate the famed beer tents in Oktoberfest.

These breweries are masters of their craft, and should be. The oldest brewery in Munich was founded in 1328, let that sink in for a moment. You know what else happened in 1328? King Edward the 3rd got married, the Hongwu Emperor of China was born, and the King of France died. The youngest brewery is only a bit shy of being four hundred years old. The six breweries are,

Of course in America Oktoberfest is probably the most recognized seasonal brew, but is often different from the traditional Oktoberfest. If you want to try one of the traditional beers you may just have to go to Germany, but you can come close with a sharp eye. It may not be a real Oktoberfest to a purist but a dortmunder style beer is close and gives a good idea of how an Oktoberfest brew should taste. A dortmunder is at least satisfying for those of us who can’t make it to Oktoberfest.

Clubs of America Beer of the Month Club Review